On behalf of Kyle Corriveau, Robert Glanville and myself James Skrypec I would just like to begin by thanking Sean Foley for granting us this incredible opportunity to shadow him, and to spend a day in the shoes of the world’s greatest golf coach.

We arrived at Orange County National Golf Resort in a timely manner on the morning of Monday November 18th, 2013. About 45 minutes early to be exact! Just enough time to stand around feeling out of place and to allow the nerves to build. None the less we had already ran through the situation hundreds of times in our minds and amongst ourselves, we were prepared for just about anything. This was not the first time each of the three of us had met Sean, but it had never been in this intimate of a situation. We had heard from every individual that knew him personally that he was an absolute beauty, a guy’s guy, another successful Canuck that was willing to do anything that would help to inspire golfers and fellow countrymen alike.

We saw Sean riding shot gun in a golf cart approaching us from about 50 yards away, he seemingly put us on the three National Professionals instantly, hopping out of the cart quick to bump knuckles and welcome us. He immediately led the conversation, asking us about our careers, our trip and how we were doing in general. Like any exceptionally well-liked individual he was making us feel good, keeping himself in the shadows. He knows who he is and we do too. He was reading each one of us, determining confidence levels, reading our body language and establishing how he was going to handle us for our time together. Sean spoke to the studying that he had done over his life on non-verbals and how people communicate without talking several times throughout the day. “Most relationships are built on intangibles that majority of people aren’t aware of. Why are you friends with your friends? The majority of people don’t know how to answer that, they just are.”

Sean ran down what our day was going to look like. He had two charity lessons booked in the morning then would run for four hours, followed by a young woman in the final stage of LPGA Qualifing school and a young man that played college golf in the USA which were two hours per lesson. A nice spread of levels for us to see.

Sean was over the top excited about the charity lessons. These lessons were bid on by organizations and 100% of the money went to children’s charity. For four hours of Sean’s time on Monday morning he raised $17,500. Sean doesn’t have to do this kind of thing, but he wants to. He said that people often ask him why he does so much charity work, people insist that it must make him feel good. He said that it is actually the opposite, he doesn’t do charity lessons to feel good, he feels good so he does the charity lessons.

Sean puts his new students in the driver’s seat. He begins by asking questions about their game, their life, their work. He takes a step outside of his world and into theirs. “I used to teach lessons to a group of older women back in Canada and all I would do is stand there and listen to their problems. I actually feel like I was the only man in their lives that would listen, and I never taught a fundamental of golf for years! People want different things from me, and that’s why I adapt to the student in front of me.” With Sean’s two charity lessons on Monday morning he looked at the two gentlemen’s swings, and gave them some information about how to hit the ball better and more consistently. Then for the remainder of the lesson Sean told all kinds of stories, everything from his days starting out on the range at Glen Abby all the way to the current work he does with his PGA Tour Professionals. He said, “For those guys today they just wanted a great experience, it wasn’t about golf they just wanted to hang out.” 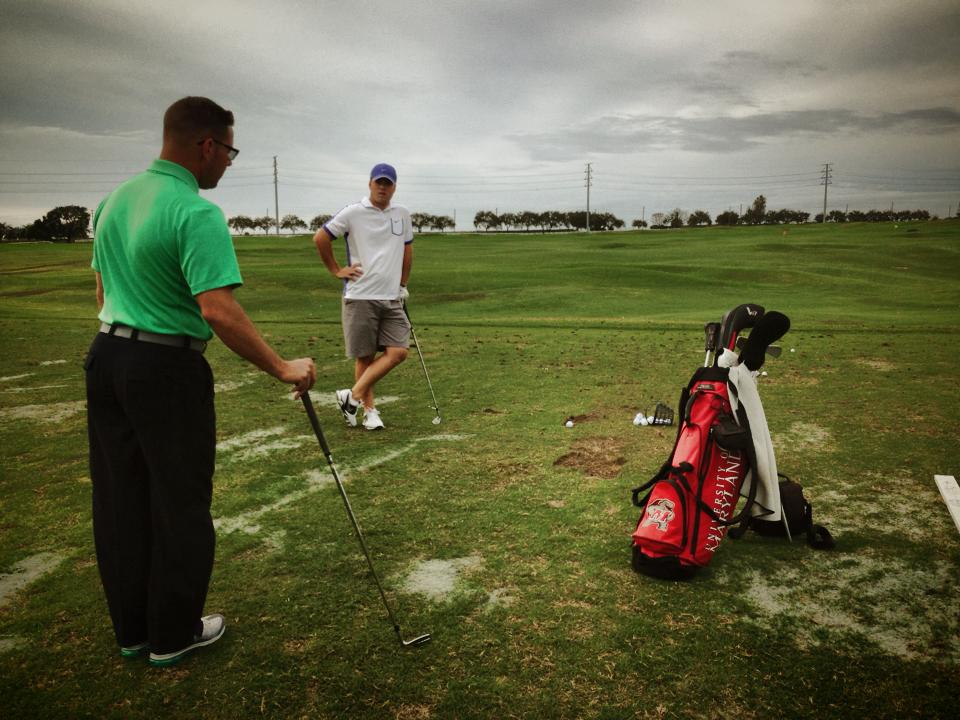 The basic outline of Sean’s lessons were all the same. He began every lesson with warm up on turf then would move to a mat where he would evaluate the student’s TrackMan data and go over video. This segment of the lesson was between 30-60 minutes then he would move into his diagnosis. Sean never once told someone where to put their elbow, where the club should be or anything mechanical like that, instead he created environments where the student had to change in order to adapt. Ex. One of Sean’s charity students played a low cut as a left-handed player. His path was out to the right anywhere between 4-8 degrees. Sean had him make a swing on an upward hill where the student was forced by the environment to get his path closer to 0. The student then took that feel back to the flat turf and was hitting the ball with a more ideal club path. Sean then explained to the student why the ball was still travelling so far left. Stating that on average 88% of the ball flights direction was determined by club face. Never once did Sean tell his student what to do but instead provided him with information and awareness. 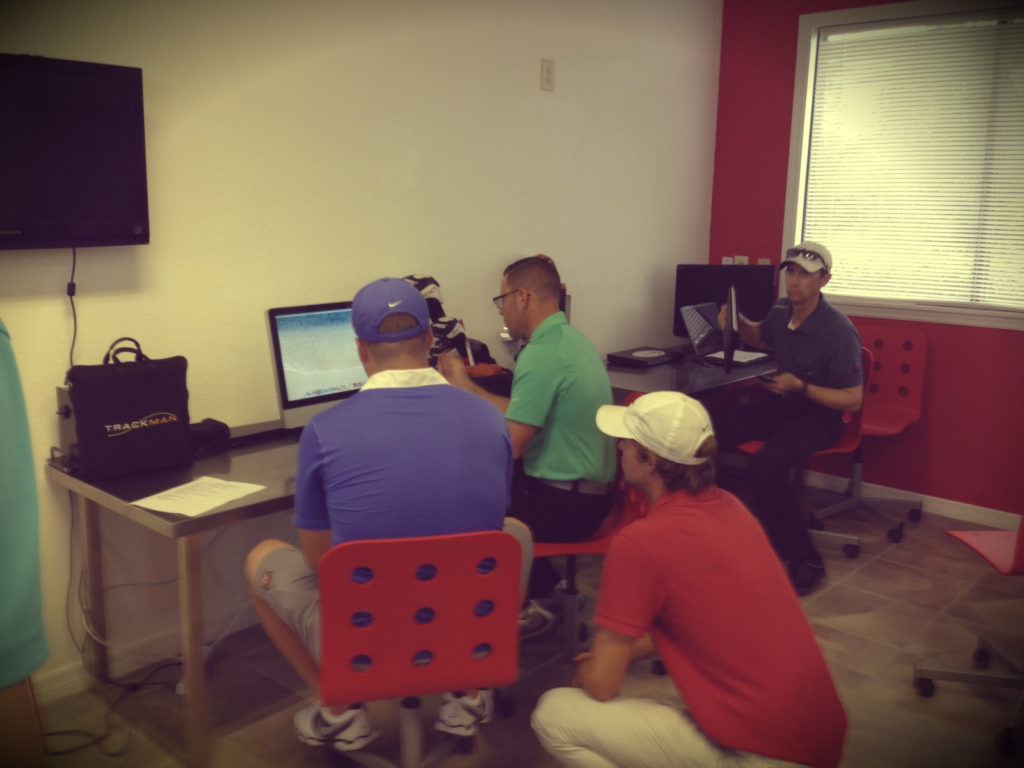 Sean knew exactly where the LPGA tour player was at with her swing. Sean gave her a few feelings that helped her step in the direction of where her swing was going. Sean put her on TrackMan for 20-30 balls, took video discussed the TrackMan numbers with her and went over video for about 15 minutes. The remainder of the two hours was just grooving one specific feel. The college player was much the same very simple, grooving one specific feel.

We were able to sit with Sean for lunch and for about an hour after the day was complete. We all agreed that we could listen to him tell stories and share his views for days. He genuinely is a quality human being, just a really great person. Sean is a very philosophical guy, often quoting people who have changed the world. He claims that there will be a time when he will be done with coaching golf, he believes his purpose on earth is much more profound than that.

Back to Education
We use cookies to ensure that we give you the best experience on our website. By continuing to use this site you are agreeing to the use of cookies.AcceptPrivacy policy