On behalf of James Skrypec, Kyle Corriveau and myself Robert Glanville I would like to thank Andrew Rice for sharing his knowledge with us and providing us the opportunity to shadow him at Berkeley Hall.

We began our day finding our way to the amazing practice facility called the Learning Centre at Berkeley Hall. It had its own driving range with sectioned private bays for lessons. The facility also had many practice greens to practice all sorts of chip, pitch, sand, and short iron shots, along with a putting green.

We made our way to Andrew’s office where he was preparing for the first lesson, which was a sand play clinic for five golfers. He was quick to greet us and introduce himself. After a brief conversation about ourselves he told us the agenda for the day and we made our way to the practice sand trap.

Andrew began the clinic by getting into the sand trap himself, demonstrating and explaining what to do while practicing sand shots. First, begin by drawing a line in the sand and practicing without a golf ball until you are striking the line first which uncovered an awareness of where exactly one would strike the sand. A few fundamental pointers he gave were: ball position up in stance, weight favoring front side, shoulders level with lie, and to control distance with the length of your follow through. He explained shorter shots need a shorter follow through, while longer sand shots need a longer follow through. When your ball is on the hard pan, or less sand your swing needs to be steeper. Finally, the sand shot is the only shot in golf where we don’t try to purposely hit the ball. The golfers then got into the bunker themselves first practicing without a ball and then began hitting sand shots quite successfully. 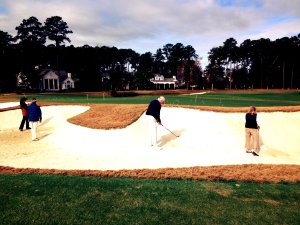 The second session of the day was a private lesson, Andrew first determined that the golfer had a positive attack angle with his irons as well as with his driver. Although a positive attack angle with a driver is a good characteristic to optimize distance, with the speed of this player, launch angle and other variables, it was too high. Andrew provided a feeling for this player to work on with his driver and irons, which Andrew explained was going to be a “blanket” meaning he needed to work on the feeling for all of his clubs, instead of working on different things with different clubs. To reduce this golfer’s attack angle Andrew got him to take practice swings on a downhill which would help him feel weight transfer, instead of hanging back. He got the player to hit a couple shots off of the downhill then moved back to the flat lie where he teed the ball up slightly to promote a downward attack angle. Andrew used a hula hoop as a visual for this player to explain attack angle. The ball was to far forward so the club had already bottomed out and was rising when he hit it, then moving the ball back in the hula hoop showing how the club needs to be moving downward when striking the ball and bottoming out afterwards. 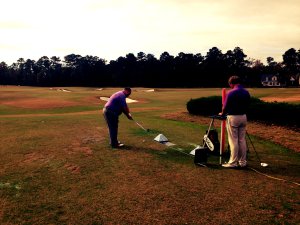 During the day of lessons Andrew always involved us to make sure we were learning and understood what he was talking about. After each lesson he asked us what we thought of the lesson, what we liked, and what we would have done if we were giving the lesson. He would then explain why he went in the direction he did and what he thought of what we would have done, which provided a great conversation and a great learning environment.

Andrew provided us a great experience as he did an experiment he had wanted to do for a long time. We videotaped the body movement down the line and face on if you were to shut and open the face 90 degrees at address with a normal grip to hit a straight shot starting at target. His theory was that most movements and compensations in the swing are caused by face. It was interesting to watch the body movement to manipulate the face to hit a straight shot. When the face was shut 90 degrees at address there was extreme lateral body movement as opposed to extreme rotational movement when the club was 90 degrees open at address.

In the final lesson of the day Andrew was working with a regular student working on drawing the golf ball. The player hit fades all his life and wanted to move towards hitting a draw for a more consistent and repeatable ball flight. At first, when feeling “swing outwards” he began to hit shanks or would pull the ball. Andrew then set up a foam noodle on the outside of the ball running in to out so the athlete couldn’t come over the top. Then they worked on trying to hit it on the toe with the new path to move impact closer to the centre of the face. The player began to hit little draws with impact closer to the centre of the face.

Throughout the day Andrew mentioned a few philosophies he had. The first was that there is no one way of swinging, but working towards the golfers intended ball flight and away from old habits. A piece of advice he had for us was not to be normal. He said “Try not to be like everyone else but rather learn from people we like and make it our own.” Finally he believes as teachers we need “new school” theories and “old school” communication. We need to know all the latest technologies and theories of teaching, but be able to communicate it to the athlete.

We are all grateful for the opportunity Andrew provided for us. He made sure to create an environment for us to learn and have fun. Thank You Andrew for providing us such a great experience! You can check Andrew Rice out on his website andrewricegolf.com or on Twitter @AndrewRiceGolf.